If you know anything at all about collectible glass, you've probably heard the name Blenko. The Blenko factory produces its glass creations in Milton, West Virginia, just about 30 miles west of where I live. Blenko's glass production over the past near century is certainly one of West Virginia's crown jewels in its economic existence. In recent years, Blenko has made efforts to better market themselves, starting some glassmaking workshops for the public. My sister and I attended an egg-making workshop the week before Easter. What an historical experience! 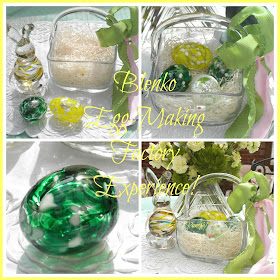 We arrived at the factory Visitors' Center prior to the class, which houses both a gift shop and an exhibit area.
When you walk into the center, you are entering the gift shop. Below is a collage of what you see in the gift shop, as viewed from the stairway leading to the exhibit area upstairs. Iconic water carafes, limited and special edition items, and color everywhere! The windows allow light to stream in and the place just glows!
Once upstairs, we confirmed our class registration and received our safety glasses. A short wait allowed enough time to view much of the glass on exhibit within the center. 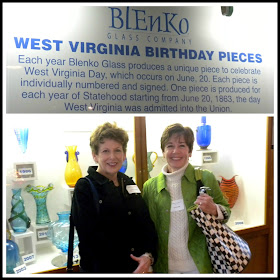 Blenko celebrates West Virginia's statehood birthday each June with a newly commissioned piece in limited production, and many of those were on display in cases, as were pieces by many of the glass artists over the factory's history (Wayne Husted, Joel Myers, etc.). Blenko has also made many commissioned architectural windows, some examples of which are in the center as permanent fixtures. Blenko windows are most notably in the National Cathedral in Washington, DC and the Cathedral of Rheims in France.
It is not uncommon to see any number of Blenko family members still on premises, and the day we were there, we saw Walter J. Blenko, Jr. (the 5th family member to run Blenko in its near century history). We also saw Ron Hinkle. Ron is an award-winning master craftsman in glass blowing in his own right, has previously partnered with Fenton Glass in designing ornaments, and has just accepted responsibility as plant manager at the Blenko factory. He will continue to run his own studio in Buchannon, WV, simultaneously.
As we headed to the factory floor, the collage below captures some of what we saw. The only regulations we had to follow in the restricted area were to have closed-toe shoes, wear safety goggles, and use a glove (one) while handling the blowpipe rod. I was surprised earplugs weren't issued (the nearly 2400° glass furnaces are not only hot, but noisy). The Blenko factory has been in its current location for nearly 100 years, using the free-blowing technique, with a traditionally male-oriented workforce of glassblowers (note the HUGE men's restroom). The equipment shows signs of its age, yet is still producing, nearly 15 hours daily.
Our group class had 15 the day we participated, each getting a turn at the glassblower's bench. We chose our colors (called frits) from several options for the two eggs we made. My sister & I were at the end of the line, so we watched the first few individuals as they worked through each step of the approximate 10 minute process per egg.
The glassblower dipped out a glob of molten glass from the furnace, and rolled it onto the blowpipe rod, much like you would dip honey. He then rolled the glob in the chosen color frits (which are ceramic bits fused and granulated into the glass) and reheated it in a smaller furnace (the "glory hole"). I held a wooden cup (called a block) beneath the glob, dipped in water prior, to cool the glass while the glassblower turned the rod over it.

Next, he blew a puff of air through the blowpipe, and heated the glob-turning-egg once more. I then used what looked like oversized tweezers ("jacks") to create the actual egg shape, eventually making a narrow end for cutting, while he continuously turned the rod. The next step was to use a pair of diamond shears around that same indentation, as he turned it yet again, almost but not quite severing the egg from the rod. The glassblower turned the blowpipe vertically, and I tapped the rod with the shears, while another glassmaker caught the egg in what's call a punty - a rod with basket that resembled a lacrosse stick. The pontil (scar mark where the freehand glass egg was broken off the rod) was smoothed with a blowtorch, and placed in the lehr (a type of oven that slowly cools the glass). You can see all the steps we covered in either the frames above or below. So much fun!
The glassmakers at our station are longtime Blenko employees, one with 36 years, the other with 24 (and his father had worked there for 47 years). In spite of the nearly 2400° glass furnaces at various points of the factory floor, it was cold on the floor the day we were there (about 45° outside). The guys said it was like working in a barn - cold in winter, hot in summer, but open year-round.

While we waited our turn, we also got to tour other areas and watch the glassblowers. We watched one guy make the special edition springtime bunnies. Below is the glassblower at work, turning, shaping, torching the finished bunny.
The collage below shows a finished example of the special edition bunny, one I purchased from the gift center after our class. Standing about 6" tall, they are totally adorable, even if you thought you weren't crazy about glass collecting, ahem, like some of us. Also available in the gift shop were the 3" crystal light bases for display. The bunny, or many other of the items in the gift shop, can set upon the base to make a terrific display or nightlight, especially for a kid's room.
Being the Panoply pickers we are, we also started eyeing things on the factory floor while we waited our turn. We saw great stuff we thought would make for some highly desirable (and saleable!) antique and vintage items. Talk about provenance! How about the tools we used (top right frame in collage below), or the molds for glass vases, or that cart?!
The folks at Blenko were smart when they planned these workshops. Not only did they time this particular one on the day before an 8 day warehouse sale, but you had to be able to return a week after the workshop to retrieve the items created, allowing for curing and packaging. My sister & I went back before the one week, so we could take advantage of the warehouse sale stock choices before they were depleted. I made another trip back to pick up my eggs.
I did not take photos of my warehouse purchases yet, but I will, and I'll share those in a future post. Below are the two eggs I made, along with my recent bunny purchase, and a vintage Blenko basket I bought long ago at an estate sale.
Fortunately Unfortunately, one of my eggs cracked in the cooling oven. You have to look closely to see it, as it's inside the egg. I was told it may or may not ever completely break apart. Not to worry! I was allowed to pick another from the gift shop to replace it, but still keep the cracked egg! Score!
So, I picked another egg, and bought one more for good measure. I put all my eggs in one basket.
My Blenko bunny, my Blenko eggs, my Blenko basket, and my Blenko vase  (except the grocery flowers, which are finaling withering after three weeks!) all plan to live happily ever after. The End. 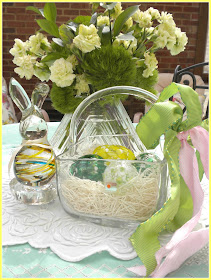 Be sure to check out Blenko's 2016 Schedule of Events, or many of the other informational tabs on their website (menu bar is at top of web page at link I provided for schedule). They also have a Blenko Facebook page, where you can follow events as they are announced. There's also a separate entity, Blenko Glass Collectors website, with loads of online information and links. If you'd like to see more of Ron Hinkle's work, he also has a Facebook page and Etsy shop.

Thanks for coming along on this eggstra special outing with me. The Blenko experience may or may not have been detrimental to my prior opinion of not wanting to collect glass. Time will tell. ;) Do you collect Blenko glass or any other type, such as Washington, Chihuly, Galle, Lalique or other?