Hey everyone! Today I want to share my new-to-me landscape garden as it is fleshing out in July of our first year here in our new cottage home. It was May when I did my last garden post, so go get a drink and get comfortable. Lots of updates and photos ahead.

We moved into this home in October 2021, and the first thing I did was a major overhaul in my Zone 6b*-7a* mature landscape. (* Being just yards away from the river in the valley, our temperatures are a tad more moderate than the rest of what my zip code - particularly in the hill sections - would bring back if you entered it on the USDA hardiness zone map, hence the range for my zone).

Since May (my first garden post in this cottage), the garden has fleshed out quite a bit, best seen in the collage below, showing the summer annuals and grass growth within the newest contours drawn back in April.

At the front of the house, the Hypericum Hydcote (St. John's Wort) bloomed most profusely in June, and still has a few blooms at this point in July.

I purchased a clematis (H.F. Young) in mid-May and planted it to the left of the Hypericum. It's doing well, and has already grown and bloomed in July. 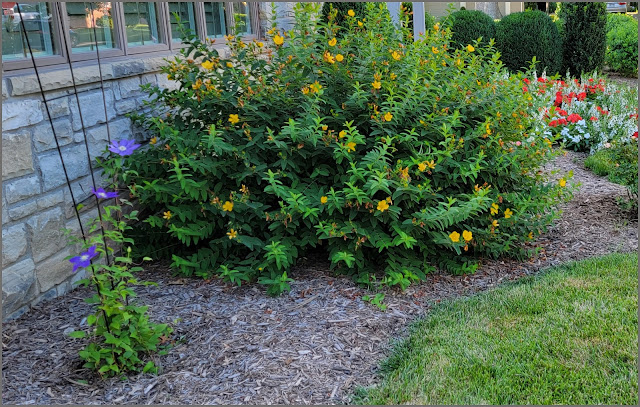 To the right of the front entry, Hydrangea (Everlasting Garnet) started blooming mid-June, and continues.

The coral drift roses were treated with Bayer's 3 in 1 Systemic Rose & Flower Care the first week of July (no affiliation, simply a reference for a product I love and use). This helps keep them from getting black spot, insects, and helps encourage blooms. Mid-July was when the second flush of blooms for these roses looked their best.

I bought two coneflower echinacea (Magnus) perennials in May to plant on either side of my garden statue (Augustine) on the north side of the house. They started blooming in late June, along with existing daylilies, of which I had no idea what variety they would be. 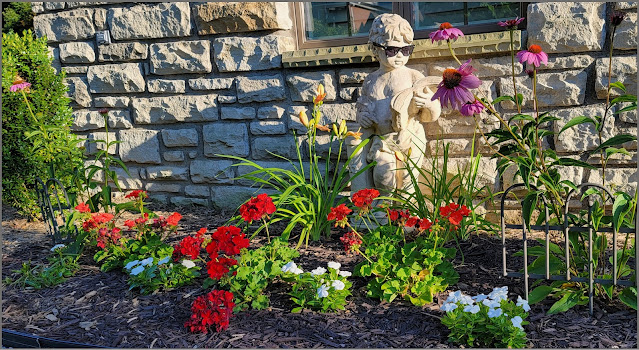 The daylilies here are a pretty apricot / peach color. Happily, the one I transplanted from elsewhere in the landscape back in April turned out to be the same apricot / peach variety.Speaking of daylilies, I had a patch growing behind the house in a narrow pathway. These started blooming in June. They are the taller, common ditch lilies. They are now completely spent, about thirty days later.

Including the daylilies planted on the north side of the house, the others were scattered in the landscape behind the house. The two varieties on the lower half of the collage were from the prior owner's previous garden which she had transplanted here. They are mid-size rebloomers, very pretty. 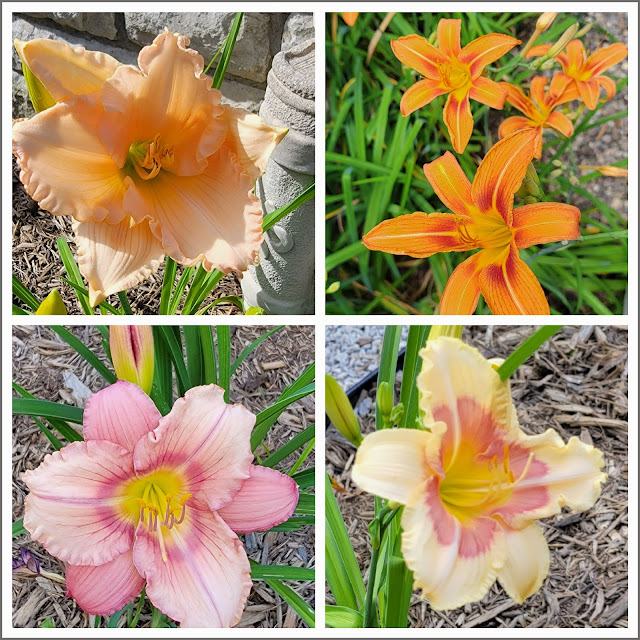 As best I could research and identify all my varieties (besides the ditch lilies), they appear to be as the labels in the collage below note. 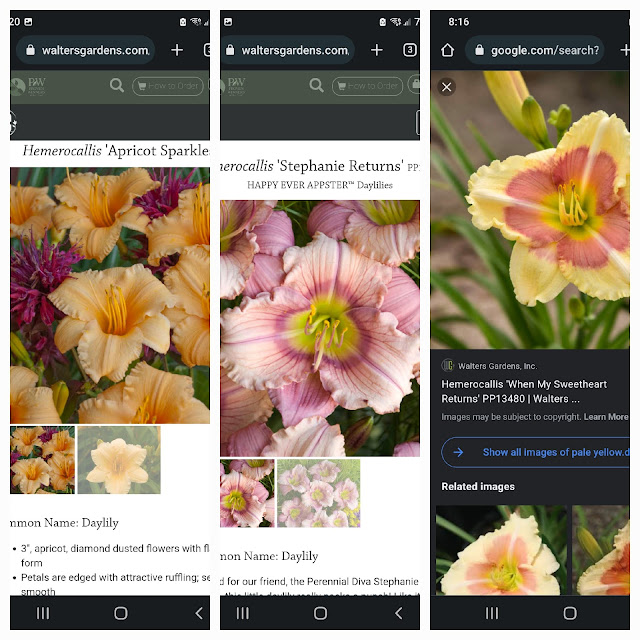 Remember back in May when I noted having a bed of what appeared to be gladiola? Well, it turns out they are Crocosmia (Lucifer)!

Just a few days after identifying the flower, I spotted my first hummingbird coming to visit! They love this flower! Though not a great photo, you can see the hummer just above the blooms in the picture below. This was so exciting for me, as I haven't seen hummingbirds in four years, since downsizing in 2018. And I'm not even putting feeders out!

A fun thing I did for my gravel space at the end of June was add a set of bistro chairs, table and umbrella. This is the perfect perch for watching both the hummingbirds and butterflies. The chairs are Big Lots (and 20% off, I love them!), the table Amazon, the umbrella Lowe's. The toss pillows are also Big Lots. The little blue gadget on the table is a Thermacell mosquito repellant (Amazon) that Suzy from Worthing Court recommended, and I would too! 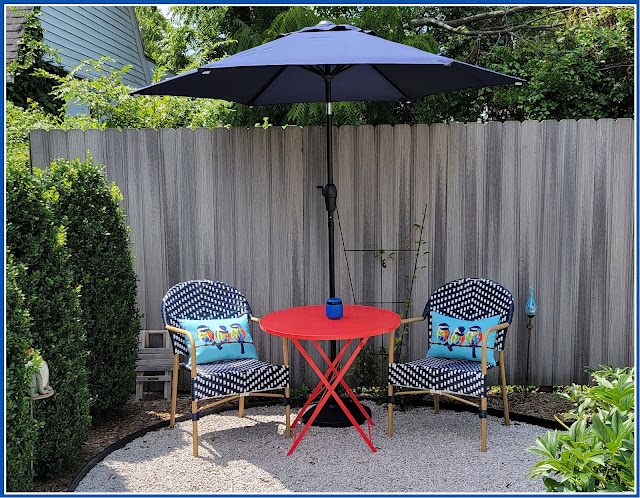 If you notice the little trellis behind the table, another garden surprise appeared on it in late June. This clematis bloom came from the vine I randomly found behind the house in early spring, which I transplanted here. It's not much, but a hopeful promise for future years, and looks to be a double blooming clematis - bonus!

The butterfly bushes and lavender I planted on the south side of my garden in mid-April can be seen when sitting in the bistro chairs (as can the crocosmia).The Proven Winners Pugster Blue butterfly bushes were named plant of the month in Southern Living's August 2022 issue. They're dwarf size, growing 2-3' tall and wide, yet have a full size bloom like the standard, taller butterfly bushes from years past. The lavender is Grosso, which can grow very large (up to 4'), but I plan to keep it pruned once my plants grow together in width.
Besides seeing new plantings doing well, seeing the butterflies and hummingbirds in the garden are simple pleasures (zebra and tiger swallowtail pictured below).
To the left of the Pugster Blue and Grosso plantings,  I had found another random plant elsewhere in the garden and transplanted here. I thought was a Limelight hydrangea, but when it wasn't blooming like one other that had been transplanted within the landscape, I began to wonder what might be wrong.

What was wrong was my thinking it was a Limelight! It's a Callicarpa bush! Also known as Beautyberry, my Google lens app identified it just this week. The variety is Early Amethyst if the landscape rendering left to me by the seller is correct. I'm looking forward to seeing this in the fall when the flowers turn to berries!

Across from the butterfly bushes and lavender are where my peonies bloomed. I had an empty space where I plan to transplant one of the peonies in fall, so in early May I started four year old Mexican sunflowers from seeds I saved from my previous home landscape. Here's what they look like mid-July (top frame of collage below). 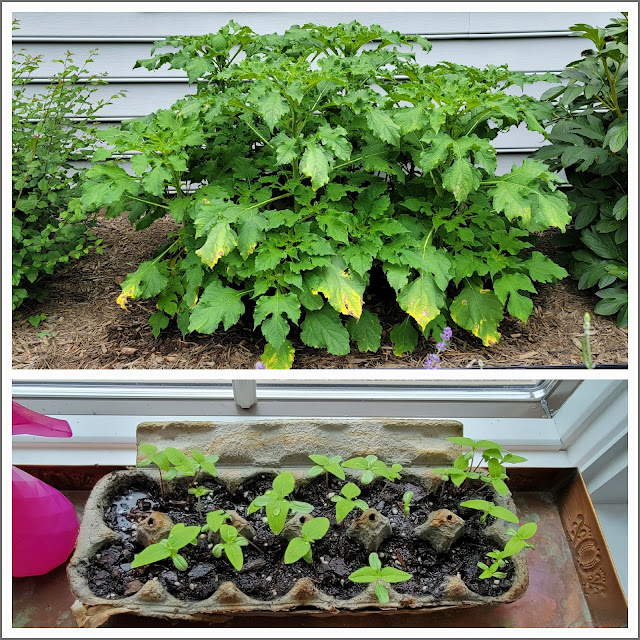 I'm expecting blooms anytime now, which will be all over these stems, bright orange, like the photo below. They attract butterflies too. By the way, to the left of the Mexican sunflowers is my lilac bush I hard pruned in May. No blooms (it's a rebloomer), but it has leafed out nicely. 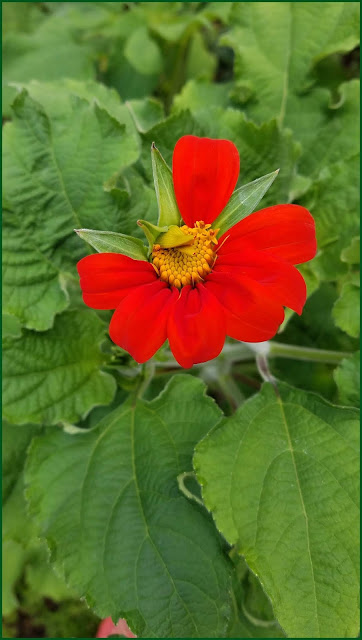 I've been working in the north garden, still watching plants emerge, surprise, and delight. This was previously the "shade" garden, but is changing since the huge pin oak tree was removed.
Taken from the street side looking into this area, I am still deciding on what I want this to be when it grows up, lol. As compared to my post in May, several more plants have grown into what appear to be healthy specimens. I have been purging much of the Lily of the Valley and Sensitive Ferns, which are invasive.

New plants which have emerged include the crepe myrtle and weigela (top right area), which are practically growing on top of each other. One or both will get transplanted in fall. I think the crepe myrtle is a volunteer from the tree-sized crepe myrtle that was removed last October.
The limelight hydrangea (top rt in photo above) was transplanted last fall and seems to be doing well. It was a nub of a plant then. 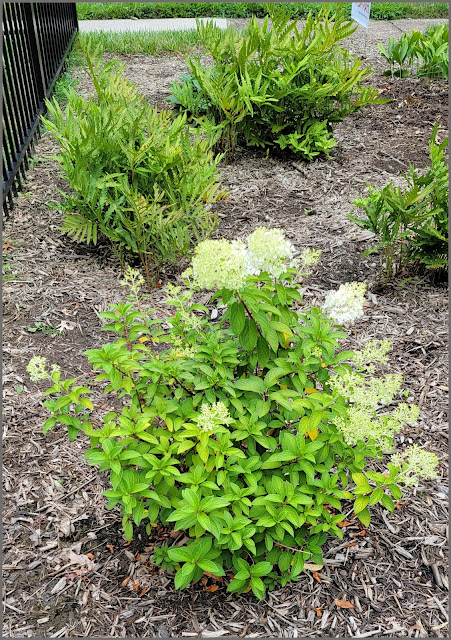 The spirea (Neon Flash) was a nice surprise in late June when it bloomed. 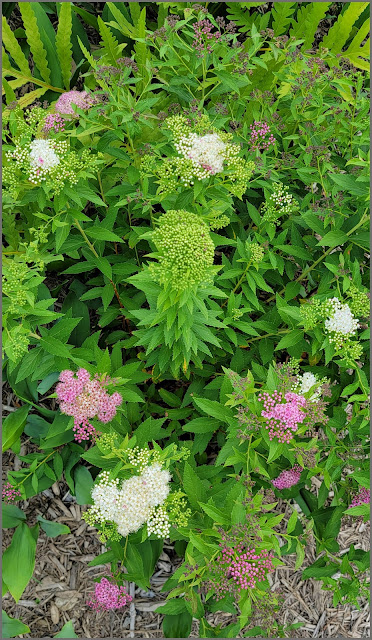 One bloom showed up on one of the hydrangeas (pink), but these must be a variety which bloom on old wood, as it was a lonely one. The same goes for the oak leaf hydrangea, which flank the Hinoki Cypress (one is visible in the labeled photo above). They did not bloom, as they were hard pruned last October.
So, that's my mid-summer cottage garden update in its first year. Before I go, I'd like to mention how much I've enjoyed the book, The Art of Flowers. I was the recipient from Pam's giveaway on her blog, Everyday Living. It is an especially welcome read and reference now that I am back in the garden. 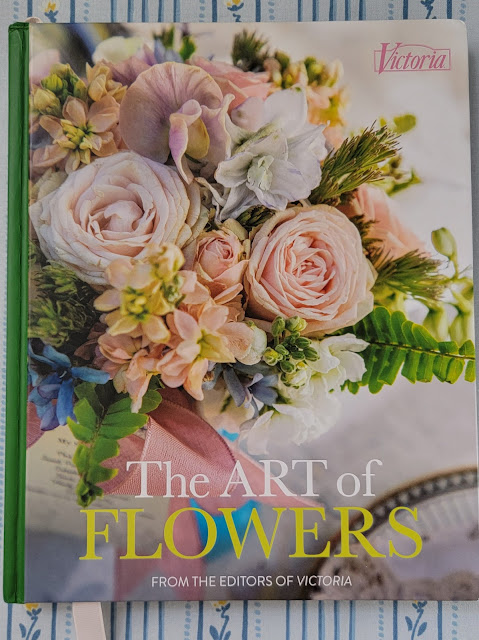 I must almost mention my blogger friend Lee from the blog A Guide to Northeastern Gardening. In one of her posts, she had on a t-shirt that I scoured until I found it. This pretty much sums up the feeling I have again, being in the garden. 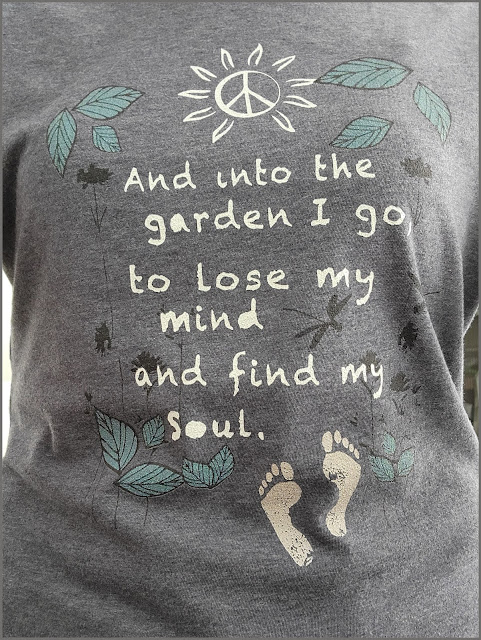 It's been a really fun almost year now (!) for me as I've played in this new cottage landscape. I hope you have something that brings you the kind of feeling my t-shirt proclaims with gardening. Pictured below is another [something] someone I've found joy in spending time with the past almost year (!). 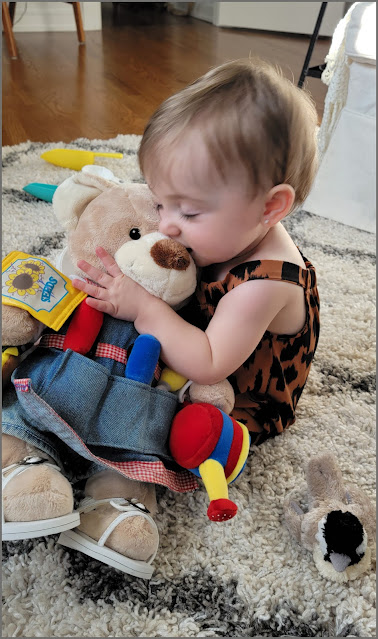 Jacqueline often visits me after her daycare and momma's work so momma can work out at the gym. This garden bear she is hugging was gifted to me by her momma, who made it for me in her first job at Build-A-Bear in 2004. Perhaps Baby J will enjoy gardening with me soon.🥰
Leave me comment and let me know you stopped by. Share some dirt!🏵️🌱
Rita C. at Panoply
A special thank you to Bev at Electic Red Barn's TFT, Amber of Follow the Yellow Brick Home's TFT, Cindy of County Road 407 Farmhouse Friday 264, Linda of Life and Linda Love Your Creativity Link Party #160, and Debra from Common Ground's All About Home #155 for featuring this post!
Parties I Share With: Pieced Pastimes, Love Your Creativity, BNOTP, All About Home Common Ground, All About Home Follow the Yellow Brick Home, A Stroll Thru Life, My Wee Abode, My Family Thyme, French Ethereal SYS, Happiness is Homemade, Traffic Jam Weekend, Katherine's Corner TFT, Eclectic Red Barn TFT, Follow the Yellow Brick Home TFT, Grace at Home, My Thrift Store Addiction, Our Hopeful Home, Karin's Kottage, County Road 407 Farmhouse Friday
Rita C at Panoply at 4:57 AM
Share