Tablescaping is Fun! An Homage to Dorothy Draper Style

West Virginia's Greenbrier Hotel has maintained its iconic status as America's Resort since 1778, and Dorothy Draper's brilliant interior design has been a major factor in that status since post WWII, when she was commissioned to redesign its interiors.
It is that iconic Dorothy Draper style that has influenced my "Tablescaping is Fun!" title today, in a takeoff of Dorothy Draper's well-known books, "Decorating is Fun!" and "Entertaining is Fun!". 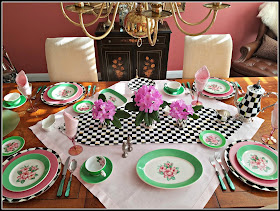 Today's featured china is an updated setting of a prior tablescape created in 2014. It is mostly vintage Homer Laughlin China (HLC) Company of Newell, West Virginia. Dorothy Draper's brilliant branding strategy of stamping bold florals, most notably the WV state flower of the rhododendron, found its way on pretty much everything used at the Greenbrier, including this china manufactured specifically for the hotel beginning in 1947. 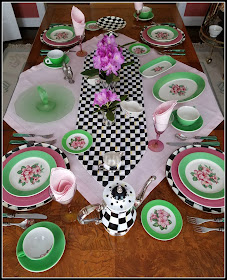 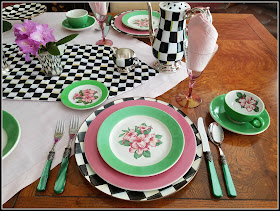 Extending the plate service, you can see some of the variations in the collected Greenbrier china I own. A green band on salad and bread & butter plates, and pink band on the dinner plates, all with the rhododendron transfer on center, are the trademark Draper emblem for the Greenbrier. The cups and saucers vary, some with the rhododendron transfer inside the cup, others without. A few other Greenbrier serving pieces are added to the table, as is the green depression glass tidbit, a piece that belonged to my mother. 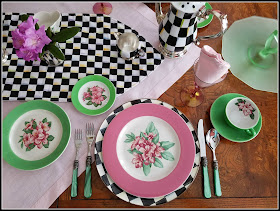 I've chosen to use my Napoleon flatware in pearl green (Horchow) for this tablescape. 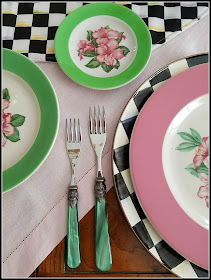 The pale pink vintage luncheon tablecloth (linen) is set diagonally on the table, and matching napkins are simply folded and placed within the antique, iridescent and swirled, pink depression stemware. 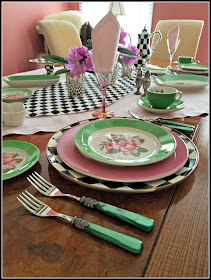 In bloom currently in our region is the Rhododendron maximum. As mentioned earlier, it is West Virginia's state flower. This variety is also commonly referred to as the American rhododenron, great laurel, great rhododenron or big rhododendron. It is native to our land, and it can be found growing wildly throughout much of our wooded, mountainous regions. Many of our neighbors grow it in their landscapes also. Bloom times will vary around the state, from late April through June, when our state's birthday is celebrated (June 20). 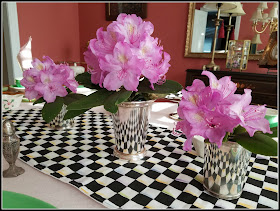 Though simple, the trio of Rhododenron maximum blooms in silver julep cups makes another bold addition to the table's center. 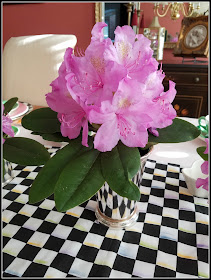 The center bloom - the largest of the three - sits in a Greenbrier monogrammed hotel silver julep cup, also part of my collection. That cup is slightly larger than the other two, and was part of my auction wins of retired Greenbrier items. That auction was held in 2011, shortly after Jim Justice, a West Virginia native, bought the Greenbrier outright in 2009 in an effort to ensure its future. Jim Justice is currently serving as our state's governor, elected in November 2016, while his family members are managing the Greenbrier.

Today, the Greenbrier china remains highly collectible, even though the pattern has seen several variations over the years. With Carlton Varney - once Dorothy's protege and currently at the helm of the Dorothy Draper & Co., Inc. - that bold and colorful style retains its classic staying power today just as it did when first introduced.

I invite you to visit my prior post, here, to read more of that Greenbrier china history. Much more of the history of the Greenbrier Hotel itself, as well as some great photos, can be found in my post on the Historical Greenbrier. 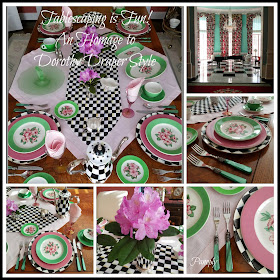 I hope you enjoyed this tablescape today with an homage to Dorothy Draper style, and find fun when you set your own tables! Thanks for your readership, and your comments are welcome.

(A special thanks to Chloe at Celebrate and Decorate "Celebrate Your Story #76" for featuring this post!)