The last major remix my sister M and I did in our booth spaces was in late May, recaptured in my early June post, here.  We attempted something a little different, but were never really happy with it. Recently, we took a step back, and did another remix of most of our spaces. We incorporated many new items from our July buying trips, and I'm sharing those changes with you now. There are lots of photos, including before and after shots. We completed this remix right at the end of July.
In the space we call our main booth, we made the most significant changes, yet the overall look appears subtle. We liked the farmhouse look we originally created in January 2016, but steered away from it in May. With new pieces purchased in July, we were able to return to the original vibe. In the remix, we removed the drop leaf table from the center, and placed the showcase in front.
On the left side of the booth, we removed the settee, flipped the black stepback cabinet for the white corner cabinet from the opposite side, and brought in the painted tea cart. We also flipped the vintage hat display from the opposite side of the booth. 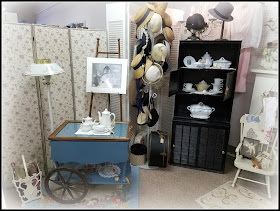 The tea cart is styled primarily with miniature ironstone, designed for child's play. The larger ironstone coffee pot is for needed height in the vignette. 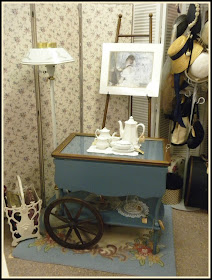 On the right side of the main booth, you see the flip of the white corner cabinet for the black stepback cabinet which I mentioned above, and we removed the shutter and shelving unit. In its place, we brought in the industrial island/cart purchased in July. A painted room divider creates our wall behind the vignette. 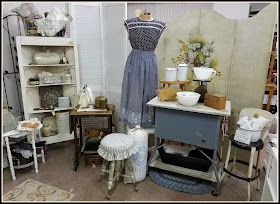 We dressed our mannequin with two vintage aprons, layered one on the other, and outfitted the vignette with vintage kitchen wares including enamel and milk glass Pyrex, scales, and few other wood and metal  accessories. 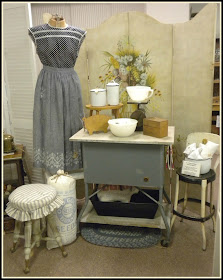 On this remix of our spaces, we left most walls untouched, other than filling void space where items sold. The space we call Mantiques was left alone on this day (above photo).
The space directly across the aisle from the Mantiques is another area that we remixed. Previously, we had a lot of garden items mixed among our mostly primitives, and felt the space looked cluttered as opposed to our intended open area, so we returned the shutter and shelving unit to divide the floor space into two, distinct areas. 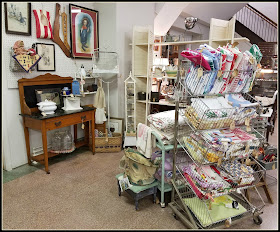 The green stepladder on the aisle was removed, and the casual linens placed there. This has worked for us before, and now the casual vintage linens are caddy cornered from the dressier vintage linens rack. We also removed the garden display (a table and fence shelving unit) from the center space, where the shutter and shelves are once again. 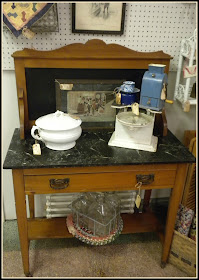 This antique, marble top washstand (pictured above) was brought in and placed against the wall. The photo below shows the wall right above the washstand. We had changed that wall just a couple weeks prior to the remix, and it remains the same now (other than the linen rack moved). On the wall, we have two framed prints, both antique Cream of Wheat advertising lithographs, two Black Americana dolls, and other miscellaneous laundry items. The larger, framed lithograph on the right is one of a pair (the other is in the Mantiques area). These advertise for Mother's Oats ("Our Boy"). 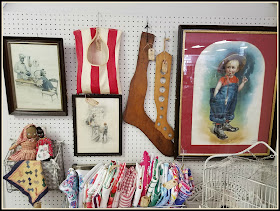 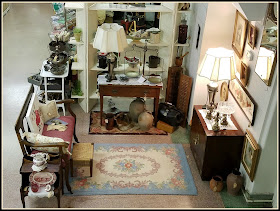 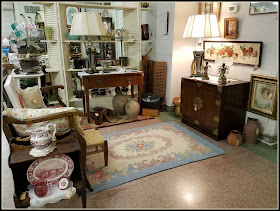 With two distinct spaces again, this section is, once again, a more formal space.

When in retail, things need to rotate and look different, even if they aren't so different. In this remix, we're returning to a look very similar to what we had in January and, when we finished, we felt accomplished. We added in a few new large items, along with many new smalls into the mix, and did a thorough job of housekeeping. It must've been effective, as we've since sold the faux fireplace in the main booth, as well as the side table and the Asian cabinet in the more formal booth space. :)

Already looking ahead toward fall and holiday changes, we'll be working to come up with something that catches customers' attention. We keep talking about needing to redo the Mantiques section, but it always gets put on the back burner. My argument is the guys know where to go and we shouldn't change it. ;)

If you want to read about more of the ways we've styled our spaces in the antique mall over time, you can check out more posts under the tab on the menu bar of my blog under Panoply Antiquing. Thanks for your visit today, and I love it when you leave a comment, letting me know you were here.

(A special thanks to Linda at Coastal Charm's Show and Share No. 237 and Sharon of Blue Willow House's Vintage Charm #45 for featuring this post)!
Rita C. at Panoply